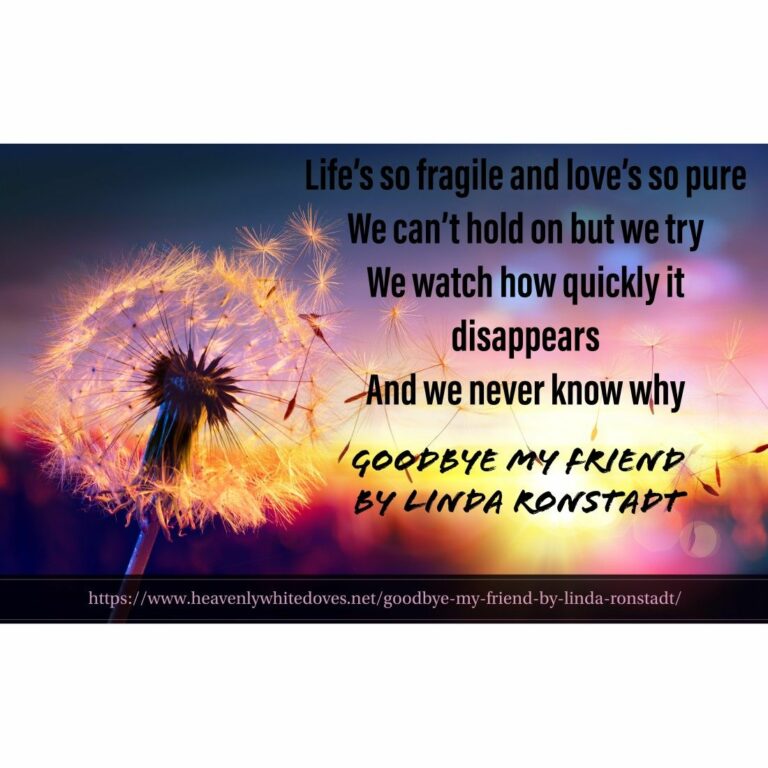 ‘Goodbye My Friend’ has become the go-to song played on Youtube video tributes about beloved pets that have passed away. The trend may have started when Oprah Winfrey showed a clip on her show in 2008 when she lost her dog Sophie. (as shown below).

It is interesting that the song was originally written by Karla Bonoff in memory of her beloved cat. Karla Bonoff said “I have never publicly said what this was about because I thought people would laugh, but I had a cat for 16 years who was the most amazing, wonderful cat and had 9 lives. One time a dog bit through its lung and it survived, another time it had bad kidneys and pulled through. The cat stayed inside because we had coyotes where I lived in Hollywood, but my girlfriend accidentally left the door open and he got out. We never found him again – the coyotes apparently got him – and it was devastating. Back then….I hadn’t truly experienced death before, except for the loss of my grandparents when I was too young to really feel that. So I only wrote that song to help myself and wasn’t planning it to be anything anyone would ever hear. I was just trying to do something therapeutic, and I was sobbing so hard I could barely sing. It’s amazing because it’s probably one of the best songs I have ever written.”

‘Goodbye My Friend’ doesn’t have always have to be played for furry loved ones –  it is a perfect song to honor a human friendship or loyal companion who has travelled with you through the ups and downs of life.