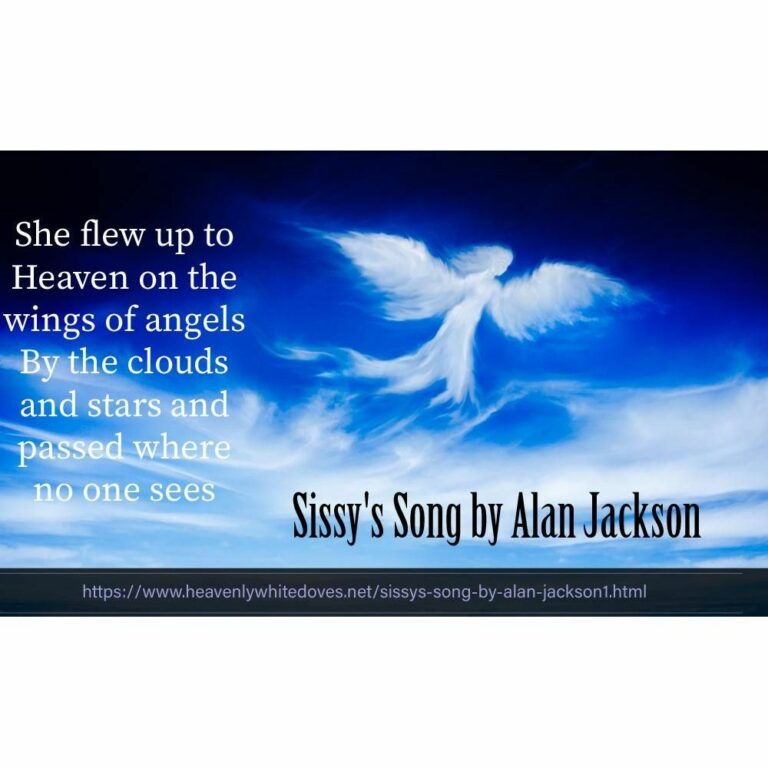 My best friend took her own life at the age of 16.We played “Who am I to Say” by Hope and “Speeding cars” – Imogen Heep.
They were songs I knew her and I connected on, but if I could go back I would play this song by Alan Jackson. It’s perfect for a wife, daughter or mother. Just listen to the song.

Why did she have to go
So young I just don’t know why
Things happen half the time
Without reason without rhyme
Lovely, sweet young woman
Daughter, wife and mother
Makes no sense to me
I just have to believe

This was about my daughter
by: Donald Scare

This sounded like it could’ve been written about my daughter, Rachel Alexander. Cancer took her life at 37, on December 27, 2012. She left behind her husband of ten years, Scott, and her,8 year old son Donny. Her mother, Dee Dee, and I, and her 2 sisters Melissa and Rebecca miss her so much. But this song tells about the truth, that she has graduated to be with her Savior and Lord, Jesus Christ, and I praise Him. And I know she’s now experiencing a joy beyond comprehension. And I do know, as Alan says in this song, she’s sayin’, ‘don’t worry ’bout me.”
God Bless you, Alan, for this touching song.

To Our Niece Sally
by: Janelle

We lost our Niece on the 22nd March 2011 suddenly aged 33 and she has left behind 3 small boys.
We played this song at her funeral and they believed it was for them and their mum.
So very special are the words.

My mother in law just recently passed and it spoke so many things for my husband and his sister and brother. She was only 56 and too young to leave us now

The perfect song
by: Anonymous

My mother-in-law just passed away and I was looking for the perfect song. Couldn’t get much better that that.

Walks with Jesus
by: Stephanie T

On September 11, 2007, my 27 year old sister in law and two nieces were in a tragic car accident. My sister in law didn’t make it but the girls pulled through remarkably with minor injuries.
I have suffered terribly with this since then just holding on to my brother and the girls for support and helping each other through this.

I know that everyone hears a song that reminds them of something, childhood, an old love, a new love, something. I never had that one song that meant something to me until now. Thank you Alan Jackson for this. It has comforted me.

A friend’s baby sister died…and they had this song played with silent dancers. Beautiful.

My grandmother has been in the hospital fighting for over four months.

She just turned 61 on July 28th. After four months of fighting, the doctors said there was nothing else they could do, & sent her home.

She then came here to my mother’s house, where she stayed for almost a week, until we had to rush her back to the hospital Sunday August 2, 2009.

We then found out her Kidney’s stopped working, so we knew it was not going to be long. The doctor called my mother yesterday & told us the family needed to get to the hospital as soon as possible, that she had less than 24 hours to live.

We all rushed down there about 3:00pm. She was completely unresponsive – her eyes were open & she could hear everything we were saying, because tears would fall from her eyes as we each talked to her, but she couldn’t respond back to us. The doctor said she was in a ‘semi-coma’.

After 6 grueling hours of the entire family sitting in her room, she finally passed away, August 4, 2009 at 9:28pm as the very last family member, her 2nd oldest child, came into the room, took her hand & said ‘Im here, mom, I love you’ – she then took her last breath & was gone.

She’s always been a strong woman.
She hung in there all that time to make sure she said her last goodbyes to EVERYONE. We love her dearly & will miss her more than you could imagine!

My sister had been admitted to the hospital because she was vomiting blood. We rushed her to the hospital, and the Doctors had everything under control.
That night my son and I went to go visit with her. I asked her to call her husband to let him know she was okay. Then I started crying, because I was getting scared. She reassured me she was going to be fine – that it was just going to be a simple procedure.
As I was crying she turned to me and said, “It’s okay, I’m going to be fine.” I left, then her son called me to tell me that the doctors wanted all the family together, because she had gone into coma, and that there was nothing they could do..I told her “You promised me you were going to be fine..”
I never got to talk to her again. Right after her funeral I heard Alan’s song to his sister and that’s exactly how I felt. Alan couldn’t have made a better song than that.

Thank you for singing such a beautiful song..

At 1:51 AM on Sunday February 15 2009, Chelsey Marie Linebaugh left us to walk with Jesus and all of her loved ones who were waiting to be with her again. She was born on November 25, 1990. Her and her best friend were on their way home from a Valentines party, with her best friend who was driving. When we all got the call saying Chels had died in a wreck and Amber had been hurt every body was devastated.
When school came on Monday everybody was crying holding everybody and telling them how much they loved them, and how much they missed Chels and how they loved Amber. the hardest thing was being at basketball practice that day. We didn’t practice much we all cried cuz Amber and Chels weren’t there. We played the game and won – meaning we would go to regionals. We all cried and prayed in the middle of the court and Cotter, the team we played came in the locker room and gave us flowers. We didn’t think our hearts could break any more but they did. We didn’t have two of our team mates and friends there playing with us. Amber who wasn’t seriously injured sat on the bench crying with us for the whole game. We knew Chelsey was there watching us. She was the most perfect person. This was the basketball homecoming queen for homecoming the January before the accident. She wore the most perfect green dress and looked absolutely beautiful. She always had a smile on her face and she never said anything mean or negative. She always helped people and she would make you smile and laugh when you were having a bad day. She was beautiful inside and out – and not a day goes by that we don’t think about her and miss her.
R.I.P
Chelsey Marie Linebaugh

I LOVE AND MISS YOU

THIS TELLS IT ALL. A BEAUTIFUL SONG BY ALAN JACKSON.

My mom died November 29, 2009.
And the song that most desrcibed the whole thing was that song.
That one and
Toby Keith- Crying For Me(Wayman’s Song).
Hardest moment of my life;
listening to my mom tell me she’s dying, then watching her comfort me.

My friends sister died of cancer at 33, leaving behind her husband and two yound daughters, very appropriate songs, had the entire church inundated with emotion.

It’s a beautiful song that brings back memories of when we had our loved ones with us.
I played this song for my grandma’s funeral.

Grandma was an avid Alan Jackson fan and when we were going to the hospital to see her we heard this.
Sadly she died 15 months later but we loved her and will see her again some day.

THIS WAS MY DAUGHTERS SONG.
HER NICKNAME WAS SISSY.
THAT SONG MEANS SO MUCH TO ME.