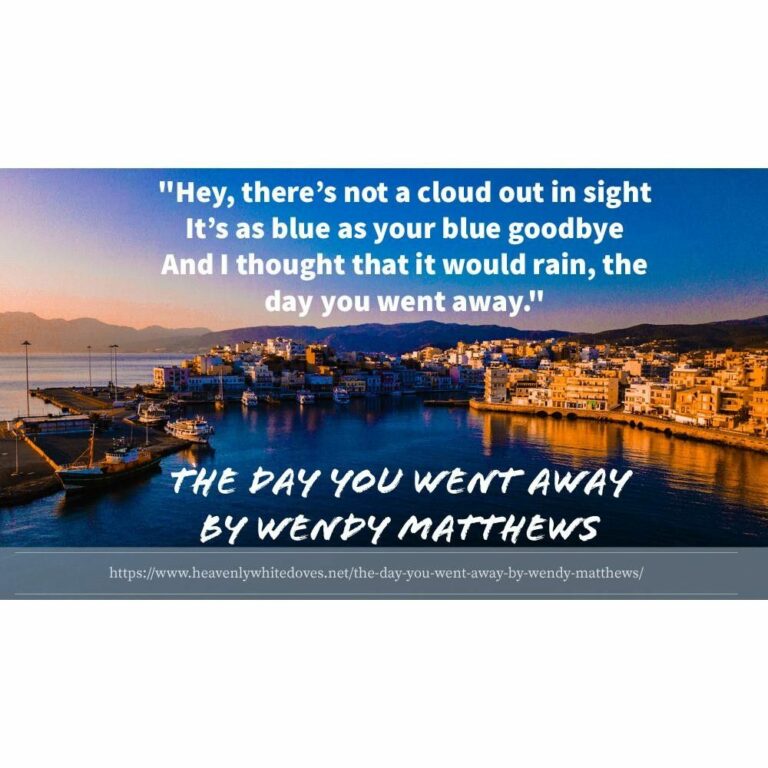 ‘The Day You Went Away’ was originally written by Johnny Male in the late 1980’s while he was studying at college in Manchester for his band Soul Family Sensation. When they released their song it did not chart.

As Johnny Male explained in an interview with The Herald Sun “The themes in the lyrics are mixed up from things in my life, but they’re the themes that classic records tend to deal with.”

“I knew it was going to be a sad song. I had the title, I had the clouds in the sky line, I liked the theme that it’s a beautiful day but I’m sad.”

Wendy Matthews recorded and released her version in 1992 and it because the biggest selling Australian single and won an ARIA award for Song Of The Year.

The last line of the song is “he’s on the buses and the aeroplane, with some groceries and a sleeping bag” Johnny Male says “That part comes from me being at college and at the time people were going away on gap years, backpacking around the world, so it’s about people travelling around Europe. I met some Australian people a few years ago and we were talking about the song and the first thing they said was ‘What’s that bit on the end with the groceries and sleeping bags about?’

Wendy Matthews insisted on keeping that part of the song in her version too “That line culminates the whole story for me. I love that line. Sometimes I change it to ‘with a xylophone’ or whatever live. It ends the whole story in one sentence. It doesn’t explain a damn thing it just says there he is.”

“Over the years this song has had many incarnations,” Matthews says. “It became an anthem when Princess Diana died, I remember going to luncheons for people with AIDS and I got up and sang it to them every year, it’s had a few lifetimes. That’s what so great is about some songs. “I hear from people who’ve played it when their father died, when their dog died, when their boyfriend left them. It means so many things to so many people according to their own lives and frames of reference.”

Hey, does it ever make you wonder what’s on my mind
Hey, I was only ever running back to your side
I never cried, I just watched my life go by
It’s just a pack of lies, ’cause you’re leaving me behind
After this long is there nothing I’ll keep
Oh I can shout
You’ll pretend you’re falling asleep
I never lied, yeah believe it, let your mind
It’s just a waste of time, ’cause you’re leaving me behind
Hey, there’s not a cloud in the sky
It’s as blue as your goodbye
And I thought that it would rain, on a day like today.