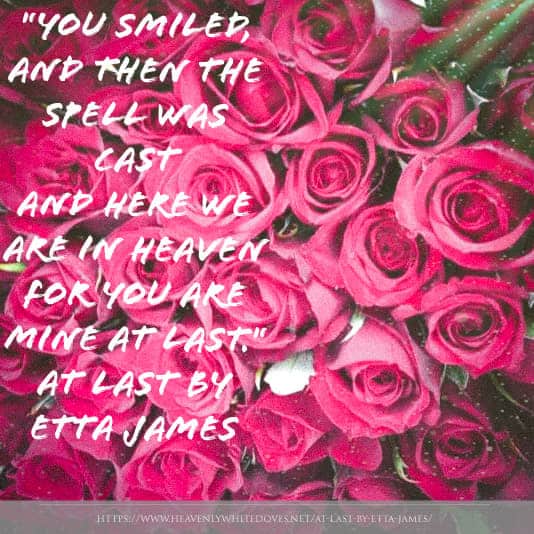 ‘At Last’ was recorded by Etta James in 1942. Because it is about finding your one true love it has been a very popular song choice at weddings, but it has been played at funerals and memorials to represent parents/grandparents/partners/couples/soul mates being reunited in heaven.

Comedian Dawn French chose ‘At Last’ for her mum’s funeral, because as she said in a 2012 interview “When my mum was very poorly and knew she was dying, she said to me, “Well, it’s win-win, isn’t it?” I said, “How on earth can you say that, Mum? You’ve got terminal lung cancer” and she said, “Well, either I stay here longer with you or I go and see your dad.” She absolutely believed that’s what she’d do. So we played this [At Last] at her funeral because at last she was with him.’

Buy Sheet Music to 'At Last' by Etta James

At last my love has come along
My lonely days are over and life is like a song, oh yeah
At last the skies above are blue
My heart was wrapped up clover the night I looked at you
I found a dream that I could speak to
A dream that I can call my own
I found a thrill to press my cheek to
A thrill I’ve never known, oh yeah
You smiled, you smiled oh and then the spell was cast
And here we are in Heaven
For you are mine at last
———————————————————————–
Songwriters: Harry Warren / Mack Gordon
At Last lyrics © Peermusic Publishing, Sony/ATV Music Publishing LLC

One thought on “At Last by Etta James”