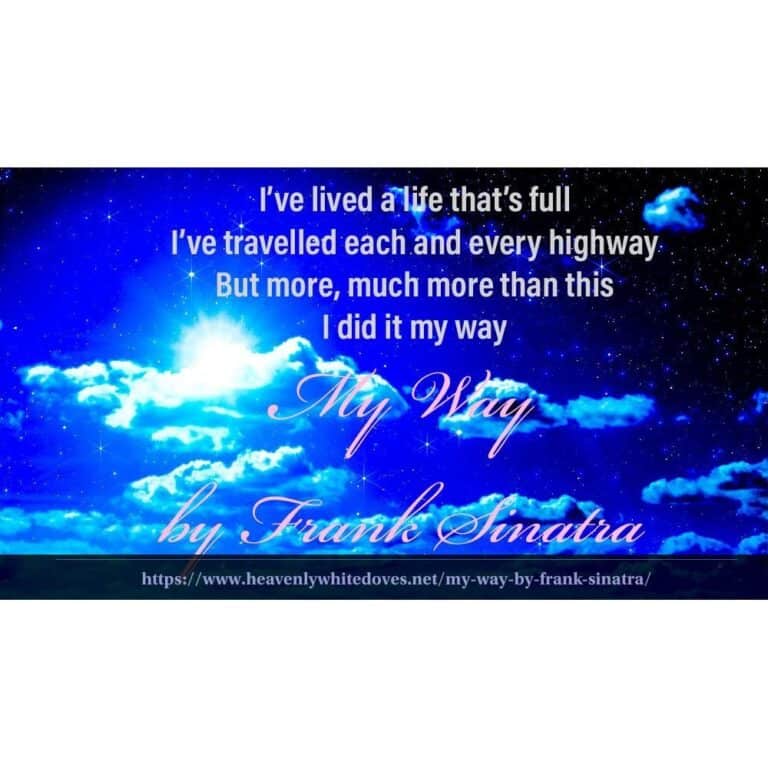 In Loving Memory of the old lady who lived next door to me throughout my childhood, Mrs Ida Lester, who passed away 3/12/2005 & always told me she wanted ‘My Way’ played at her funeral. It was played along with the release of 6 white doves.

‘My Way’ was originally a French song called ‘Comme D’Habitude’ (meaning: as usual) but it was discovered by American singer Paul Anka who wrote lyrics in English for Frank Sinatra. It has become one of Frank Sinatra’s most popular hits.

A 2005 survey of funeral homes listed this song as the most often requested song to be played at funeral services.

Buy Sheet Music for 'My Way' by Frank Sinatra

Yes, there were times, I’m sure you knew
When I bit off more than I could chew
But through it all, when there was doubt
I ate it up and spit it out
I faced it all and I stood tall

And did it my way l
I’ve loved, I’ve laughed and cried
I’ve had my fill my share of losing
And now, as tears subside
I find it all so amusing
To think I did all that
And may I say – not in a shy way
Oh no, oh no, not me
I did it my way
For what is a man, what has he got
If not himself, then he has naught
To say the things he truly feels
And not the words of one who kneels
The record shows I took the blows
And did it my way
Yes, it was my way
————————————————————
Songwriters: Claude Francois / Gilles Thibaut / Jacques Revaux / Marcelo Drumond Nova
My Way lyrics © Warner Chappell Music France, Jeune Musique Editions, BMG Rights Management US, LLC, Songs Music Publishing